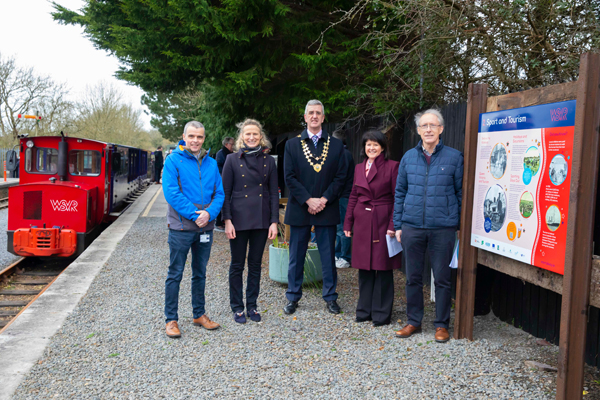 Waterford Suir Valley Railway has officially unveiled and launched five new storyboards on the Story of Rail at Kilmeaden Station at 3.30 o’clock.

The launch coincides with the reopening of the Railway for the 2022 season, and trains will be running all over the midterm break from Saturday 19th to Sunday 27th February (times below).

The story boards are the final stage of the rebranding of Waterford Suir Valley Railway which began in 2019.

Maria Kyte, manager of WSVR said “we are very happy to see the final aspect of the rebranding of the WSVR project finished.  It has been a pleasure working with rebranding experts Totem. Colin Byrne and his team at Totem have delivered us a brand that reflects what the Waterford Suir Valley Railway is about and we will be proud to use it as we continue to develop the story of rail in the future.

“It was important to us to use railway material, we chose old rail and sleepers from the station to hold the storyboards. It’s a wonderful, bright addition to Kilmeadan Station. The WSVR maintenance crew prepared the supports, the boards were printed and erected by Signiatec, Kilkenny.”

The five storyboards feature stories WSVR wanted to preserve and share: the story of rail, of time, of emigration, sport and social history, of how the railways were built, what they were used for, how they were a mirror to Irish society, and the story of WSVR itself!

There’s an abundance of fascinating and surprising stories, from William Dargan, the father of Irish Rail to Brunel, the greatest engineer. The arrival of the railways changed everything, how we travelled, the world opened up to ordinary people, all kinds of goods became available via the railways, they even changed how we tell the time.

The platforms of every station throughout the country saw tragedy and joy in equal measure. Travel and tourism exploded with branch lines all over the country carrying emigrants away from their homes, goods and livestock for export and to stock shops with new factory goods.

Waterford Suir Valley Railway was set up to preserve Ireland’s rich railway history so that this and future generations will never forget the important role the railway played in everyday life in Ireland.

John Norris, chairman of WSVR said, “in 1920, there were 964 train stations on the island of Ireland, by 2020, only 142 stations remained. Visitors to the railway experience and Waterford Greenway can read the stories and photographs displayed on the five story boards at Kilmeadan Station.”

Funding of €23,082.50 was awarded to the Rebranding of WSVR project under the National Rural Development Programme 2014 – 2020, Implemented by Waterford Leader Partnership CLG on behalf of WLCDC and WC&CC.

Kilmeadan Station is home to Waterford Suir Valley Railway, a social enterprise operating a narrow- gauge railway as a tourist attraction.  The railway is opening for the week of the February mid-term break with train trips departing on the hour from 11am to 2pm Monday to Saturday and 12noon to 3pm on Sunday.

Visitors are invited to take a step back in time to 1878 as they check in at the ticket office, a converted Mark 11 railway carriage at the beautifully restored Kilmeadan Station. Chat to the friendly, volunteer train drivers while being escorted to a private compartment on the train. Hear the whistle blow as the train departs on a nostalgic journey through Waterford’s Suir Valley, an area rich in history and only accessible by train and the Waterford Greenway.

Located 11km from Waterford City, Kilmeadan Station is also a refreshment stop on Waterford Greenway. The Whistlestop Café provides a welcome rest for walkers and cyclist on the Greenway, with bike parking, rest rooms, picnic tables and open wifi.