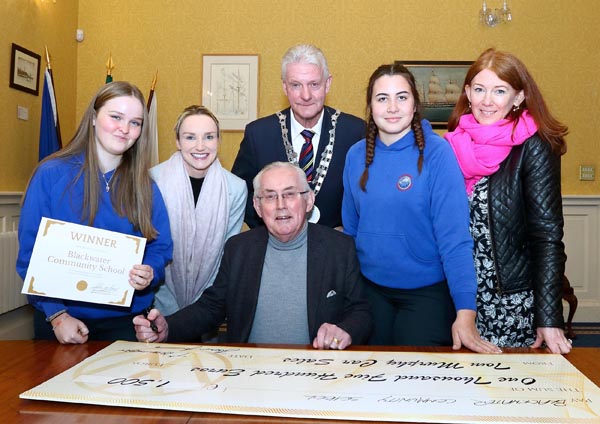 As Waterford schools gathered for a Mayoral Reception earlier this week, it was Blackwater Community School that emerged as the overall winner of the Schools Litter Challenge and received €1,500.

The Schools Litter Challenge, sponsored by Tom Murphy Volkswagen, in association with Waterford City and County Council and Waterford Chamber saw fifteen schools from across the city and county partake in the challenge, which is now in its second year.

The competition which started in October encouraged secondary schools to keep a designated local area litter free.  The students then carried out regular litter picking, identifying black spots for litter in their area, learning about the sources of litter, and about the benefits of using reusable items instead of single use items.

Speaking at the reception, Mayor of Waterford City and County, Cllr. John O’ Leary said, “The momentum began building in schools immediately and continued right throughout the six weeks of the competition.

“Some schools got several class groups involved and others held multiple clean ups each week. The enthusiasm was heartening to see, and I’ve been told of many complimentary accounts of pupils carrying out clean ups around the city and county. It’s important to note how impressed local communities were when they saw the students out litter picking.

“It also made it clear that the environment has never been so important to young people, they showed just how willing they were to put those ideals into action.”

Tom Murphy of Tom Murphy Volkswagen reaffirmed the mayor’s observations.  “Our company was delighted to sponsor this initiative for a second year.  The difference before and after the students began picking up litter was evident.

“I noted it myself on my daily walks around the city, and it was obvious that the students retained their commitment and dedication in keeping their designated areas litter free.  Tom Murphy Volkswagen is proud to support this initiative that helps develop a sense of pride and ownership in our communities.”

Ella Ryan, Environmental Awareness Officer with Waterford City and County Council commented, “The secondary schools taking part in this challenge really enjoyed getting out in their local community and helping to make it a cleaner neighbourhood.

“It was great to see the videos and TikTok’s they made of their clean-ups, regardless of the weather conditions. I’d also like to acknowledge the work of the teachers who got involved and drove the competition on.” 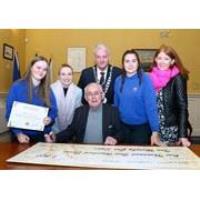