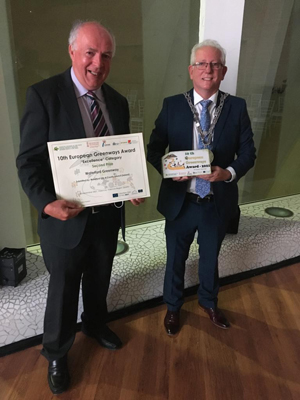 Waterford Greenway was internationally recognised last night as it came second in the Excellence Category at the 10th European Greenways Award Ceremony, which was held in Valencia, Spain.

This prestigious award ceremony, which is organised annually by the European Greenways Association, recognises best integration of characteristics that define a greenway and the strengths that make them exemplary amenities.

Present at the ceremony were Mayor of Waterford City and County, Cllr. Joe Kelly and Richie Walsh, Waterford Local Enterprise Office who travelled to Valencia for an International Conference on Greenways, Mobility, Leisure and Tourism.

Mayor of Waterford City and County, Cllr. Joe Kelly was delighted with how highly Waterford Greenway was regarded by the judging panel.  “To be recognised in the Excellence category is a wonderful honour and is a reflection of the reputation for quality and the wonderful visitor experience that is Waterford Greenway. It is a credit to all those who have made it happen over these past few years and I know they can be very proud of their hard work and dedication that have helped make Waterford Greenway one of the best in Europe.”

Michael Walsh, Chief Executive Waterford City and County Council also congratulated the Waterford Greenway team on the award saying, “It’s testament to vision of the Council’s Greenway team that developed and manage this wonderful amenity. Great credit must also go to the local communities, stakeholders and other state agencies that have helped create something unique in Waterford.”

Johnny Brunnock, Trails Officer, Waterford City and County Council added that the combined efforts of locals and the business community had helped to create a publically accessible amenity that the county can be very proud of. Mr. Brunnock went onto add that ‘the value of Waterford Greenway was particularly apparent as we have navigated our way through the challenges presented by the pandemic.’

Fiona Monaghan, Head of Product Development – Activities at Fáilte Ireland said, “The Waterford Greenway is a best-in-class example of how infrastructure and orientation can create outstanding experiences for domestic and international visitors that can benefit the local community. The Waterford Greenway has proven to be a great amenity for visitors and we are pleased that it has been awarded second place in the Excellence Category at the prestigious European Greenways Awards. I would like to congratulate our partners at Waterford City and County Council on their hard work in developing this wonderful amenity.”

Established in 2003, the biennial European Greenways Award is presented to greenways that stand out for their excellence and demonstration of best practice. Another objective of the Awards is to support the replication of the best practices on other greenways all over Europe. The European Greenways Awards are only granted to greenways under the Lille Declaration, as well as to initiatives already in existence.

For more detail on Waterford Greenway check out: www.visitwaterfordgreenway.com

For more detail on the European Greenway Association check out: https://www.aevv-egwa.org/ 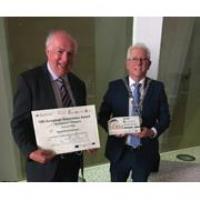