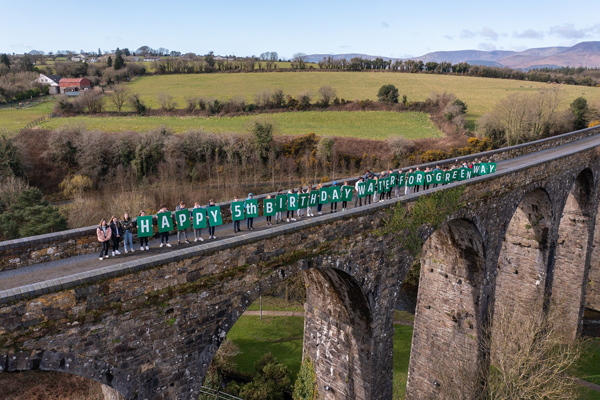 It’s hard to believe that the much-loved Waterford Greenway has been open just five years, yet many locals will find it hard to imagine life without this award-winning trail on their doorstep.

The Waterford Greenway stretches from Ireland’s Oldest City in the East of the County, through the picturesque village of Kilmacthomas to the harbour town of Dungarvan in West Waterford. Freedom, fresh-air, magnificent scenery and chance encounters are some of the highlights often mentioned by visitors to this spectacular trail in Ireland’s Ancient East.

Waterford Greenway was officially opened on March 25th 2017 by Minister for Housing, Planning and Local Government, Simon Coveney TD on the 50th anniversary of the last passenger train journey between Dungarvan and Waterford City. Since opening, the Waterford Greenway has attracted over 250,000 visits annually, resulting in the development of many tourism and hospitality businesses.

In five short years the Waterford Greenway has won the hearts of locals and visitors alike and celebrated a number of accolades which include; being the first Irish Greenway to receive the Green Flag Award for Parks and Green Spaces in 2020 and retain it in 2021, winning silver in the Excellence Category at the 10th European Greenways Award in 2021, and most recently being named Best Visitor Attraction in the Irish Independent 2022 Reader Travel Awards.

The captivating trail offers spectacular views of the Comeragh Mountains, the River Suir and the Waterford coast as you freewheel your way from the City to the sea, through tunnels, across viaducts and past old railway stations. Attractions along the dedicated cycling and walking trail include, with the world-renowned ornamental gardens at Mount Congreve, Waterford Suir Valley Railway, and the Copper Coast UNESCO Global Geopark. The many vibrant coffee stops along the route will give you a flavour of the fantastic food and coffee scene in Waterford, where you can relax with an old friend or a new one!

Michael Walsh, Chief Executive, Waterford City and County Council added, “Waterford Greenway has been transformative for the county. Businesses have been built, visitors have come time and again and of course locals have the huge benefit of having this world class amenity on their doorstep.”

The Waterford Greenway can only get better as work is already underway to improve the Greenway connection to the city centre and are due for completion in 2023. Works are progressing very well on the New Ross Greenway, with the new sustainable transport bridge in the City allowing visitors to continue their Greenway journey from Waterford through parts of Kilkenny and Wexford.

Feasibility studies for a connection between Waterford City and Tramore, Dungarvan and Mallow and a Waterford Greenway to Suir Blueway connection are all underway and will undoubtedly bring more opportunities to locals and visitors to get out and enjoy the fantastic sights in Waterford and the South East. 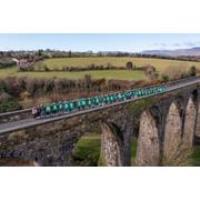