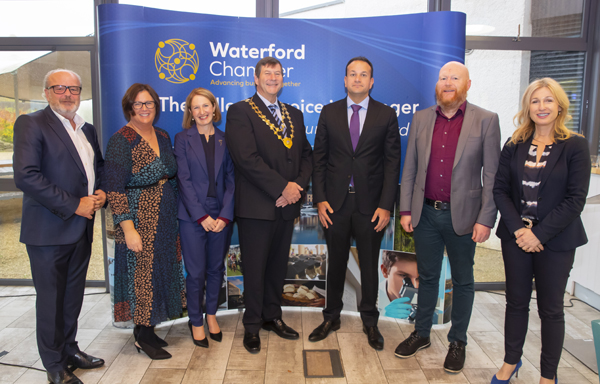 “I never thought the housing crisis would get this bad”, admitted An Tanaiste Leo Varadker at a meeting with Waterford Chamber on Friday morning last in Grow HQ.

Following addresses by a number of Chamber members, the Tanaiste took to the podium to respond on critical topics such as housing, the energy crisis, SETU and family supports for children with disabilities.

Opening the meeting, Paul Nolan, Waterford Chamber President said that Waterford and the South East were progressing well at present in terms of SETU, Waterford Airport, plans for the North Quays and more. However, he was clear in his messaging that more needed to be done and the business community were only too willing and able to assist in this regard.

“We believe in our businesses and Government must be opened to listening to them, learning from them and working with them, so we can progress and develop a better city and region for all.”

Prof Veronica Campbell, President of SETU, began by thanking the members of Waterford Chamber for their positivity. “Your members have been such a support to me since I took office and I very much appreciate that”, she said.

Prof Campbell told An Tanaiste that “there is strength in harnessing a regional focus” and that her current priority “is to lead the strategic plan for developing regional and international connections”.

In response, An Tanaiste said he is fully committed to the development of SETU and that Government will continue to support, while also adding “SETU will do for Waterford what UL did for Limerick”.

Meanwhile, Regina Mangan, Liberty Blue Estate Agents, told stakeholders, “In 25 years in business, I have never seen it so horrific.” She went on to say that on that day there were only nine properties available for the whole of Waterford on Daft.ie, adding “that’s in Ireland’s best place to live, but there is nowhere to live and Government are failing to bring in meaningful measures to tackle this crisis.”

The Tanaiste admitted that the rental market wasn’t working in its current form and that he doesn’t “rule out” putting in measures to support smaller landlords in future budgets. He went on say that the country is going to run out of accommodation in the coming weeks and there are currently 2000 people arriving into this country every week who need housing. In terms of the eviction ban, which he said he was initially skeptical about and “doesn’t like the fact we have to do it”, but it “buys us a bit of time to do the things we need to do to provide emergency accommodation over the next few months”.

Waterford Chamber’s Lynda Lawton spoke openly and honestly about the lack of support for families with autistic children, making five distinct recommendations, including transparency in funding, reviewing the carer’s allowance means testing, making disability training mandatory on the teacher training curriculum and providing additional resources for schools. She also spoke about supporting parents of autistic children who are forced to give up their jobs, by getting them back to work during a major skills shortage.

In response, An Tanaiste said abolishing the means testing on the carers allowance “would cost a lot of money and we need to balance the books”. Referring to the lack of services, An Tanaiste said it’s not as much about the funding but that there is a distinct shortage of therapists both in Ireland and internationally.

Concluding the presentations, Owen Power of Enerpower, spoke passionately about the Government’s shortcomings in terms of the energy crisis and offered a number of solutions, which the Tanaiste acknowledged and requested a follow up on.

“We’re not doing well at all on emissions targets but we are doing reasonably well on renewables, we’re up to 40% now and aiming for 80% by the end of the decade.”

He also spoke of the ambition of becoming an exporter of energy within a generation which he believes is achievable and will make a huge difference going forward.

Following the meeting, Gerald Hurley CEO of Waterford Chamber said: “Waterford Chamber has an extensive lobbying agenda, we have a diverse network of professionals across a number of sectors who are driven, experienced and willing to help and advise on cost effective solutions.

“Our letters and submissions with recommendations to Government Ministers are usually simply acknowledged but there is very little action there after.

“After our discussions and recommendations on Friday, I hope that will change, as I believe it was very clear how passionate and willing to engage our membership is.

“All of the topics discussed on Friday are critical issues that we have already brought to the Government attention and yet we are left feeling that there is an apparent lack of urgency on behalf of Government to implement changes that will make an immediate real difference.

“It’s easy to identify problems and yes we know there are plans in place, work has commenced in some respects but it needs to move faster. Our speakers offered some real tangible and immediate solutions and let that be the take away message from our event, we are here to work with Government.

“Urgency, commitment and real engagement - that’s what we are asking for today and every day.” 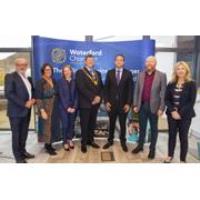