Sun shines for warm Royal welcome in the Déise 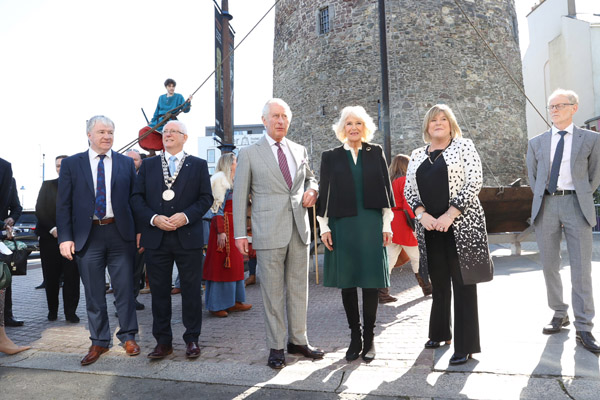 Arriving under blue skies and warm sunshine, the Prince of Wales and Duchess of Cornwall arrived in Waterford City to a warm Déise welcome.

Prince Charles and his wife Camilla commenced their walk through Bailey’s New Street at the base of Reginald’s Tower, Waterford’s landmark monument and Ireland’s oldest civic building.

As Their Royal Highnesses continued their walkabout, they paused at the world’s longest wooden sword sculpture at 23 metres, crafted by local wood sculptor, John Hayes. The ‘Dragon Slayer’ sword is perfectly housed in the heart of the Viking Triangle and in the shadow of the 13th century Franciscan Friary, which was founded by King Henry III, in 1394 and 1399 King Richard II held court here and it was closed by Henry VIII in 1536 and made into the Holy Ghost Hospital by charter.

Continuing their walkabout The Prince of Wales and Duchess of Cornwall enjoyed a lively performance from award-winning street art company, Spraoi.  The Royal visitors were treated to the musical talents of the Mount Sion Choir.  The choir is part of Foróige, Ireland’s leading youth organisation which celebrates diversity through music.

They met with artist James Kirwan, a visual artist and part of the Waterford Walls project, a creative arts agency regenerating urban spaces and excelling in the delivery of large scale artwork across Ireland and Europe.

On their walkabout in Waterford, TRHs The Prince of Wales & The Duchess of Cornwall met with Emergency First Responders and Front Line Workers and spoke with them about their first hand experiences of serving the people of Waterford during  the COVID-19 pandemic.  They also met and spoke with some of the large crowd who came to greet the Royal couple in Cathedral Square.

Before learning of Waterford’s history at the Medieval Museum, Their Royal Highnesses heard from local people about how they are securing their future.  They met with members of ACT Waterford, an initiative which engages communities in creative solutions to climate change.

The couple then visited Waterford’s Medieval Museum.  There, they learned about Waterford’s rich history as Director of Waterford Treasures, Eamonn McEneaney showed them The Great Charter Roll of Waterford, made in Waterford in 1373, it is regarded as one of the great treasures of medieval Ireland because of the number and quality of the illustrations.

The Prince of Wales and Duchess of Cornwall continued to the Large Room at City Hall for a Mayoral Welcome.  They met and spoke with a diverse range of groups representing Waterford’s wide and far-reaching achievements in entertainment, integration, community, sport, arts and enterprise and spoke with members of the Ukrainian community in Waterford.

Mayor of Waterford City and County Council, Cllr. Joe Kelly, warmly welcomed the Prince of Wales and the Duchess of Cornwall to Waterford.

“Our connections run deep, our connections span generations and our connections have shaped us.  And today we are honouring one of our most enduring and long-standing relationships with our closest friend and neighbour, the United Kingdom.

As Mayor of Waterford City and County it is my privilege to welcome the Prince of Wales and the Duchess of Cornwall to Waterford, Ireland’s Oldest City.”

He continued,  “While Waterford is a city of firsts, moreover it is shaped by the people who live here, work here, raise their families here and call Waterford home.  Our culture, our community and our connectedness burn bright and today we are surrounded by those who have shaped our community, enhanced our culture and fortified our connections throughout the world.”

Addressing the invited guests, The Prince of Wales said, “To be welcomed so warmly, not least by a Viking re-enactment, is a wonderful blessing and one that will certainly live long in our memory.  It is in places such as Waterford , Ireland’s Oldest City, where we are reminded so vividly of our ancient connections and how they have evolved over time toward a modern friendship.”

“From a Viking town to a city with a Royal charter, the place where the first Irish tricolour was flown, to the home of a new university and acclaimed best place to live in Ireland, Waterford is a city of promise and hope for the future.”

TRH The Prince of Wales and Duchess of Cornwall were presented with a signed copy of “The Royal Charter of Waterford” by Julian Walton and a copy of “The History of Waterford and its Mayors”, published by Waterford Council and edited by Eamonn McEneaney.

The royal couple then signed the Mayors Visitors book in the Mayor’s Parlour and left City Hall to continue their Waterford visit with a tour of the House of Waterford Crystal, GIY, Fitzgerald’s Farm and home of Cheltenham Gold Cup Winner, Henry de Bromhead’s yard in Co. Waterford. 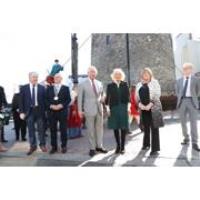