Summer Sessions in the Marquee 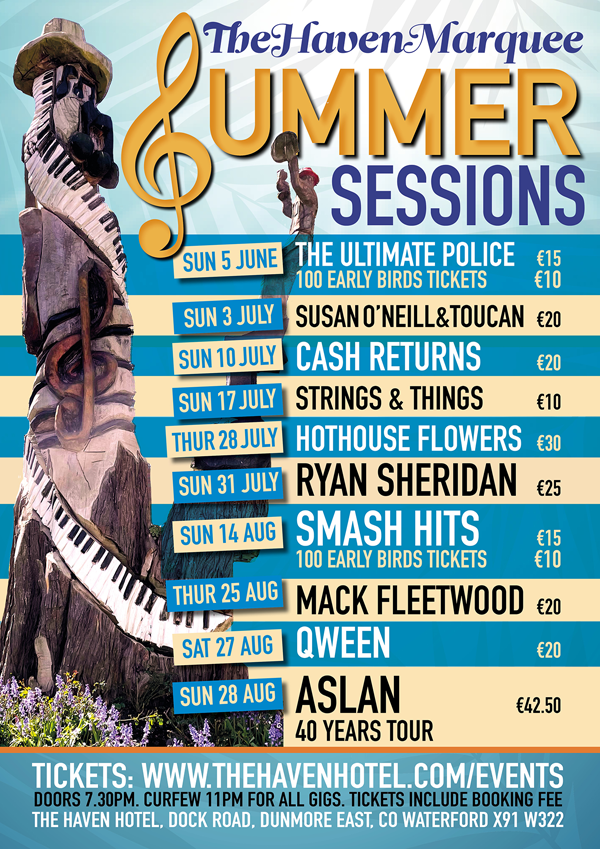 Dunmore East is set to be the music capital of the South East for the Summer as Daytripper promoter, Mick O'Keeffe, has teamed up with Paul Kelly and his team at the Haven Hotel to put on a series of Summer gigs at the 400 capacity Marquee on the lawn overlooking the sea.

It really is a stunning location with the recent sold out Damien Dempsey gig there showing the potential of this unique venue in one of Ireland’s prettiest villages.

Heading up the original artists lined up is one of the country’s finest singer-songwriters, Gavin James, who plays a very special gig on 24th July, the weekend of the release of his highly anticipated third album, The Sweetest Part.

Also in July on the 28th, The Haven is ecstatic to welcome the return of one of Ireland’s best ever live bands, Hothouse Flowers, who last played the venue to a crowd of thousands back in the 1980s.

Bringing the local element is a co-headline gig on 3rd July from Susan O'Neill, who has enjoyed an incredibly successful year with her ‘In The Game’ album collaboration with Mick Flannery. Susan and her band will share the stage with Toucan, another fantastic live band from the Deise who have had national success, selling out venues all over the country.

Fans of trad music are in for a treat on 17th July with a high energy set from Strings & Things.

Finally in July on bank holiday Sunday 31st, Ryan Sheridan will rock the village with a greatest hits set and selections from his brilliant new album, Americana. In August (28th) the highlight is the return of everyone’s favourite band and national heroes, Aslan, on their blockbuster '40 Years Tour’.

Providing top class entertainment for Dunmore’s Summer crowds are some of the finest tribute bands in Europe, starting with the Marquee Summer Series launch night this coming Bank Holiday Sunday 5th June, with The Ultimate Police. Early bird tickets for this one are just €10 and flying out, so don’t delay getting yours.

The award winning ‘Cash Returns’ tribute to the man in black is on 10th July, while fans of 80s supergroups Fleetwood Mac and Queen are going to be out in their droves for Mack Fleetwood on 25 August and Qween on Saturday 27th August.

The Marquee Summer Series has something for everyone with the country’s best party band, Smash Hits, playing their 90s fun filled set on Sunday 14th August. Tickets for this one are nearly gone so don’t miss out.

Finally on Sunday 7th August, 3 of Waterford’s longest running dance music promoters Republik, Get Down Edits and Resistance team up for ‘House @ The Haven’ a 6 hour party from 5pm to 11pm, co -headlined by 2 of Ireland’s most legendary DJs, Shane Johnson (Fishgodeep) and Billy Scurry with support from Republik and Get Down Edits residents.

More information on all shows and ticket links are available at www.thehavenhotel.com/events 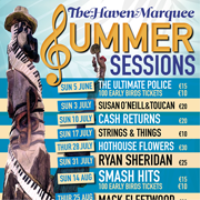