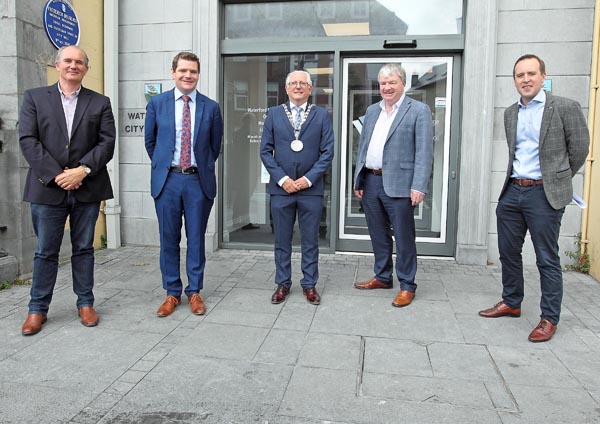 St. Joseph’s House is a former religious convent on a landmark site on Manor Hill. Through the Repair and Lease Scheme, funded by the Department of Housing, Local Government and Heritage, 71 dwellings for the elderly will be delivered. Of the 71 dwellings, 50 units are located within the main building and 21 located in the various out-building clusters on the site, while the former chapel on the site will be proposed as community space for multiple uses by tenants.

The Minister then visited the Slievekeale site, where work is nearing completion on the delivery of 58 social housing units. The first phase of dwellings has already been completed and is now providing new homes in a unique city-centre setting for 24 households.

Claire O’Sullivan, Manager of Tinteán Housing Association gave the Minister a tour of the new proposed units at O’Connell Street, which will provide 12 apartments units with staff support on site.

In 2019, Waterford City and County Council ceased the use of B&Bs and hotels by working in collaboration with Tinteán Housing Association and Focus Ireland to provide units from its own housing stock as an alternative for homeless households.

According to Ms. O’Sullivan, “Over the past 22 years the Service has evolved due to emerging needs, and is now providing a transitional service with 24 hours on-site support for women with complex needs as well as long-term housing with support for men, women and families off site.  We also provide short-term emergency accommodation for families experiencing homelessness which is a successful Waterford Council initiative as an alternative to using B&Bs and hotels for homeless families.”

“Up until now we were housed at Virginia Crescent, Hennessy’s Road and as it was always our aim to move away from residential setting to providing own front door units in line with housing first/housing led principles.”

Prior to a walk through Waterford’s Cultural and Viking Triangles, the Minister met with Council officials where he was presented with Waterford City Centre Design Strategy, Waterford’s City Centre regeneration project which was granted under the Urban Regeneration and Development Fund (URDF).  The allocation has allowed Waterford City and County Council to bring significant investment into the centre of Ireland’s Oldest City and create opportunities for people to live, work and play in a variety of re-imagined public spaces and places.

Minister Burke said, “I am immensely impressed to see the work underway in Waterford to tackle our housing crisis and make full use of resources allocated by the Department. The Repair and Lease scheme in particular is providing high quality homes in prime location for our older people and I hope this use can be mirrored elsewhere in the country. I also welcome the great progress made on homelessness with the international best practice Housing First strategy being employed successfully by Waterford City and County Council.”

“I thank the officials and members of the Local Authority for their warm welcome to Waterford and their presentation on the regeneration project. I look forward to these exciting plans coming to fruition and to visiting again when works are complete.” 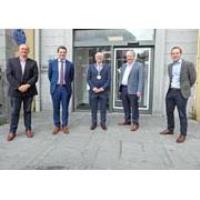