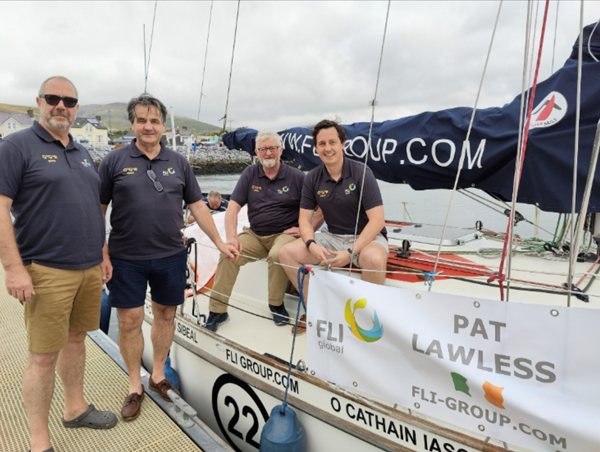 FLI Global - sponsoring Irishman Pat Lawless in the Golden Globe Race 2022 – where 18 sailors will line up to sail solo and non stop around the world in 1968 boats with 1968 technology – departing France on 4th September 2022.

Just as in the first GGR in 1968, the current race is the most extreme test of seamanship, endurance, courage and mental resilience that you will find anywhere today. It is a retro race using small production boats sized  between 32ft and 36ft and with only  the technology available from the late 1960’s.  The race departs from Les Sables-d’Olonne, France on September 4th, 2022 and sails solo, non-stop around the world, via the five Great Capes and return to Les Sables-d’Olonne.

Pat who is 66 years, originally from Limerick and living Ballyferriter Co Kerry has salt in his veins.  His late father Pat Senior sailed solo around the world at the age of 70 and his brother Peter is currently on a solo circumnavigation voyage of his own.

However, for Pat its about the race and getting around nonstop. He says “I’m in it to win it, however I’m very mindful of survival and arrival.” No Irish person has ever sailed solo around the world nonstop. The race is part of sailing history. He said, “I can’t wait to get started”, “there have been only 11 nonstop solo sailing races around the world”. Pat explained that the first race in 1968 was won by Sir Robert Knox-Johnston who is English, and the other 10 have been won by the French, so “we need to get Ireland on that elite list”.

During the race Pat will have no contact with family, friends, or support groups. Pat will navigate by the position of the sun using only a sextant and paper charts. There are no modern luxuries such as computers, GPS, sat phones, iPads, electrical auto steering and water makers. He must carry all his own food, water, tools, and spare parts for the 9 months at sea. If he stops or takes external assistance he will be disqualified from the race.  It attracts only the most sea hardened sailors with the single mindedness and the courage to take on nature and the sea. It’s not for the faint hearted or weak minded.

Over 4,000 people have climbed Everest and about 600 have travelled into space.  However, only 150 people have ever sailed solo nonstop around the world.  Most of which, are today’s modern sailors who circumnavigate nonstop using the finest technology, weather routing and have constant contact to support teams and family. The retro GGR race is a return to a different time where its back to film cameras, cassette tapes and paperback books and the heroes who take our dreams with them.

Last summer during his qualifying miles, Pat and his boat Green Rebel stopped in Waterford for a few days while on return from Iceland. He was introduced to a local company the FLI Group and its Chairman Michael Flynn.  FLI have since decided to support Pat by becoming a sponsor and recently purchased a full set of racing sails for Pat.  Michael Flynn said FLI are delighted to be sponsoring Pat. “We are interested in people with passion and who follow their ambition- and who ask themselves why not when big challenges are presented. What Pat is embarking on is much more than a race, it is a story of imagination, overcoming fear and having courage. That is something that very much resonates with us here at the FLI group having found ourselves in hot deserts, wild jungles and remote islands as we build our global business founded in 1989”.

The FLI Group are also supporting a second entrant in the race. Simon Curwen an English man living in France has close connections to the FLI Group business at FLI France. The FLI Group provided Simon with batteries and a 12 volt electrical system for his boat fitout. Simon is also a vastly experienced sailor and as a member of the FLI team we are proud of him and his ambitions to complete the race.

“We wish both sailors a safe and successful circumnavigator and from September 4th we will be following the progress of the race with great interest, via the tracker link on our website www.fli-group.com”. 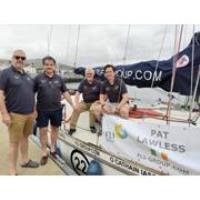