The multi-national company also picked up the Technology & Innovation of the Year award during the streamed event and is the second time the Tramore based company has won the top prize, collecting it first back in 2016.

NearForm is one of the biggest success stories to come out of Waterford, if not Ireland, during Covid 19, having created the tracker app, which is now being used globally.  Just last week, the company  secured a multi-million euro investment from Columbia Capital, which will be used to scale up operations and accelerate recruitment in sales, marketing, engineering and design, across North America and Europe.

The company, founded by Tramore native Cian O’Maidin, currently employs around 160 people, most based in the sunny South East, but plans are afoot to grow that number considerably.

Accepting the award, Mr O’Maidin said: “This award recognises the commitment, talent and hard work across the board here at NearForm. There were a lot of weekends and late nights getting projects over the line during the year and our people have gone above and beyond. It is a real privilege for us to build the Covid apps. How cool is it that we get to build something that saves lives and it’s our job! It’s going to be pretty crazy over the next few years for us and we can’t wait to see what happens next.”

Meanwhile, David and Sandra Whelan of Immersive VR Education were named Waterford’s Entrepreneurs of the Year. Topping the categories were RelateCare for Customer Service Excellence, The Food & Beverage Award went to Glorious Sushi, Murphy Larkin Timber Products for Excellence in E-Commerce, Green Excellence winners were Enerpower, Liberty Blue Estate Agents took home the Marketing Excellence Award, Micro Business of the Year went to Inn the Doghouse, New Business of the Year was Iasc Seafood Bar, SME of the Year was Powerflow Electronics, Nearform for Technology and Innovation and Dunmore Adventure was named Tourism Activity/Attraction of the Year. 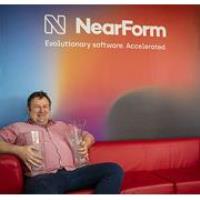