AIB’s John McSweeney takes over as President of Waterford Chamber 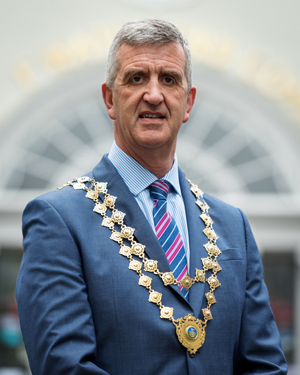 Originally from Cork, John moved to Waterford in 1996 with AIB Bank having worked previously in Kerry, and has held a number of different management roles in Waterford and the South East Region, most recently as Branch Manager with responsibility for AIB the Quay, AIB Lisduggan and AIB WIT Campus branch. A graduate of the IMI with a Hons. Degree in Management, John was also President of New Ross & District Chamber in 2017, having served on its board since 2013.

Addressing Waterford Chamber members, John said: “We find ourselves presented with advocacy challenges in a time when normal policymaking cycles have been greatly accelerated. Our approach will be a sensitive and sensible balancing of interests coupled with an ability to engage in a partnership with other stakeholders if we are to successfully deliver on some of our goals, as outlined for example in our recent Resurgence 25x initiative. There is no reason why our much-documented position as the fifth largest city should hold us back in not being the first to market on many initiatives as we develop over the coming years. We have great businesses and business people amongst us who operate at world class levels, who want and are willing to support this City, County and Region.

“The recent announcement regarding the North Quays Development was both disappointing and frustrating for many of our members. However, in tandem with other potential developments, it does afford Chamber the opportunity to ensure, though proper dialogue and engagement that any such developments will bring a vibrancy, footfall and cross community use that supports existing businesses on both sides of the river.  I remain hopeful that those parties which we intend to engage with over the coming months will be proactive and take a similar view on what any finished development should look and feel like. Given the times we operate in, brave business decisions will be required and we hope those who can deliver the changes will be willing to step up in this regard.

“We have much to be proud of in terms of Waterford as a location to live, work, study and do business in. Being able to access excellent leisure activities quickly is the envy of many people across the country. As restrictions ease, I would ask all our members and the wider community to consider supporting those in business across the city, county and region. I know they would appreciate your custom now more than ever. As a Chamber we can also look forward to returning to more normal networking events and other activities which have always proved popular for our membership.”

OUTGOING PRESIDENT
Outgoing President Danette Connolly said now is the time to look forward. “In the annual report I spoke of the old Maori proverb “Turn your face toward the sun and the shadows will fall behind you”. Never has that been more fitting as we finally begin to turn our back on Covid and emerge back in what will hopefully be a brighter future for us all.

“The shadows cast over all our lives over the past 18 months has been unprecedented but we have come out of it stronger, wiser and with a better sense of purpose than ever before.”
Danette went on to say, “I look forward to Waterford being a University City, the first decarbonised city, a city with a fully functioning airport, with an expansive retail offering, a vibrant tourism trade, the North Quays as a new vision is established. I wish all the businesses that are now opening doors and adapting to the new ways the very best of luck and success.”

CEO REPORT
CEO Gerald Hurley re-iterated the Chamber’s commitment to the business community, saying: “I would like to welcome John McSweeney as incoming President. As always there is plenty of work to be done and I have no doubt that John will hit the ground running and bring his own flair and enthusiasm to the role. John and I, along with the Board of Directors will continue lobbying on your behalf on pertinent issues as they arise. Our door is always open should you need our assistance in this regard. Finally and most importantly, I would like to especially thank our members for your support and ongoing commitment to Waterford Chamber. Together we are the largest business representative organisation in the region and that is a very powerful network which can build a better Waterford for all.”