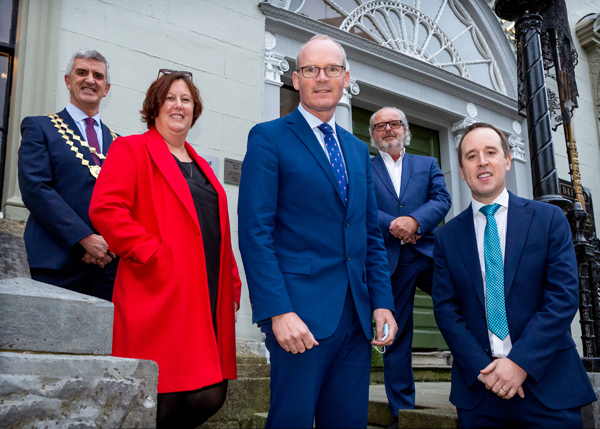 Waterford Airport, housing, university status, digital transformation and economic development were just a selection of the topics presented to Minister Simon Coveney on a recent visit to Waterford Chamber.

The meeting, which was held in the unique Parlour Vintage Tea Rooms, was attended by a number of Waterford Chamber members. Opening the meeting and addressing Minister Coveney, John McSweeney, President Waterford Chamber, said: “Waterford’s development requires the correct political and economic will and bravery, strategic focus, desire and commitment on promises that were previously give to its communities.”

Speaking about WIT, John said: “Talent is key to attracting investment. The future format of 3rd level education delivery is critical to Waterford. Waterford must be the centre of such delivery supported by investment, which to date has been far behind that of other 3rd level institutions. We do believe we must be treated fairly by Government. We do not believe that a model with many mini campuses spread across the region offers the best experience for students despite such comments continuing to emanate from Government. Failure to deliver a strong Waterford City WIT structure will, we believe, be a negative step that will have implications far beyond the South East Region.”

In addressing the airport, John asked for recognition for the airport development, “through an extended runway and associated infrastructure”.

“We do not envisage a significant investment spend in overall terms, which we believe will bring much larger returns in terms of the South East region’s development across many fronts.”

Following his address, John handed the floor over to the chairs of the Chamber’s expert panels, beginning with Niall Harrington of Fewer Harrington & Partners. Niall told the Minister “Waterford is not on a level playing pitch with other cities” and that the Metropolitan boundary is a hamstring to the city, leaving it disadvantaged in many respects. Among other solutions, he advised the Minister that Waterford has the ideal population of 60,000 for pilot programmes, for example the creation of a digital hub and data centre similar to the IFSE or Docklands. Combining SDZ status with a pilot regeneration programme would have a hugely positive impact on the city, Niall said.

Kevin Doolin, Executive Director at the Walton Institute, who heads up Chamber’s Education, Research & Innovation group, reiterated that the Technological University of the South East was essential in driving economic development. However, he said, the funding differences between technological universities and universities is far too vast, with universities receiving in the region of €50 million annually. He also pointed out that WIT was punching far above its weight and highlighted that the Walton Institute, as part of WIT, has raised more ICT funding that all of the other institutes combined. He said this was increasingly frustrating when projects like the development of the new engineering building are being kept on the long finger. Concluding he said Waterford was the only city in Ireland that doesn’t have a university headquarters and that needs to be addressed.

Representing the Waterford Green Deal, Niall Griffin, Metalman Engineering and Owen Power, Enerpower, appealed to the Minister to take a serious look at issues around planning permissions which are currently long and costly and to the barriers around the National Grid.

Ciarán Cullen, Handheld.ie, leads the Digital Transformation and Smart City group and was emphatic in telling the Minister that we must be “planning for what we need not for what technology is available as that is already out of date”. He reiterated that Waterford is the ideal location to build scalable projects that can be tested in our city. He said it is imperative that access to the municipal area network needs to be extending to the North Quays, the Port and the Airport and that cloud infrastructure is essential. Ciaran also said that how we plan for technology is a problem and that we need to plan for where we want to be and not where we currently are.

Richard Hurley of the Granville Hotel represented the tourism and hospitality sector and acknowledged the Governments support of their industry during the pandemic. He said sustaining competitive advantage is now a concern but that there are huge opportunities in Waterford and “our time is arriving”. He appealed for consistency in the VAT rate to there could be sustainable value to the customer and that the industry needs more public and private investment.

Danette Connolly, Home Instead Senior Care, acknowledged the recent investments in UHW but highlighted the fact that it is “the least funded of all Category 4 hospitals in the country”. She appealed to the Minister by saying “Health is everything and we need good healthcare.”

Accountant Aidan McAvinue said that people need to be encouraged to actively develop businesses and that entrepreneurship had taken a big hit in recent years, while Regina Mangan, Liberty Blue Estate Agents, made a passionate plea in terms of housing. “Legislation is driving landlords out of the market. We hear all the time about greedy landlords but that’s just not true in the majority of cases. They are ordinary people and we need some incentive to keep them. We have to acknowledge that not everybody wants to buy their own house and then we have students living in hotels. It’s just not on.”

Having listened intently to the group, Minister Coveney began by saying “Thank you for taking this meeting as seriously as you have and for expressing your strongly held views of Government.”

He said in terms of the broader economic development of the region, “Government does see Waterford as the economic driver of the South East.” He acknowledged the frustration aired in relation to WIT but pointed out the barriers were not only in Dublin. He is certain Minister Harris wants to make TUSE happened as a matter of priority and with that will come the required funding.

He said the Government were really serious about driving growth and investment and that also goes for housing development. He acknowledged that the ambition can only work if we have the housing to go with it and said there is a general look at all legislation around the planning process being undertaken.

“We have to have an avenue for people to object, but we also need decisions much quicker”, he said.
In terms of digital transformation, he said: “I take the point if Ireland is going to be recognised as a leading tech centre globally, we need to stay ahead of the technology. We are serious about 30% of the population working from home and need to support this.” He also advised that there are now less than 100,000 people on the PUP payment and that is continuing to fall every week. Interestingly, he also said that 40% if those back to work have not returned to the same job or even sector. He admitted “the pace of job creation is happening a lot faster than we expected” and that they will work closely with the hospitality sector to make sure they are fully supported.

As for health, Minister Coveney said, “The cardiac unit is not about the money. The problem is making investments on the back of independent advice. It’s a policy issue, but I would still expect the Government will fix the problem.”

Concluding Minister Coveney thanked Senator John Cummins for arranging the meeting with Waterford Chamber and said there is “no substitute for what we have just done here this evening”.

Speaking after the meeting, Waterford Chamber CEO Gerald Hurley said: “Minister Coveney came and he listened. We were clear in our messaging and expectations, and we hope our contributions will go towards delivery. He was incredibly generous with his time, which was very much appreciated, and we look forward to many more robust engagements with Government over the coming months.” 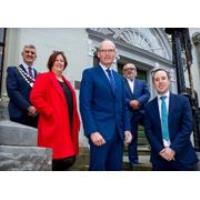